An overview and descriptions of projects we're working on

Our long-term goal is to understand how regulatory DNA dictates transcriptional network behavior and, ultimately, organismal phenotype and evolution. Our approach is mechanistically motivated: we believe that understanding the molecular mechanisms that drive transcription will lead to models of gene regulation that can predict the functional consequences of regulatory sequence changes and guide production of new types of regulatory circuits.

The strength of our system lies in the breadth and depth of experimental, computational and theoretical approaches that are possible in Drosophila embryos. The nuclei in blastoderm embryos are in a monolayer at the surface, making it easy to image transcription quantitatively in both fixed and live tissue. All the players in the patterning network are known making it ideal for systems-level studies. We can also perturb the network using genetics, transgenesis and genome engineering. Finally, the availability of many genome sequences from related species and natural populations makes insects an outstanding clade for evolutionary studies. Combined, these tools allow us to go “soup to nuts” — from genotype to phenotype — at a level of detail that is impossible in other animal systems. The lessons we learn will be widely applicable to other animal systems including humans, as has historically been the case for research on Drosophila transcription.

Read more about our ongoing research projects below. 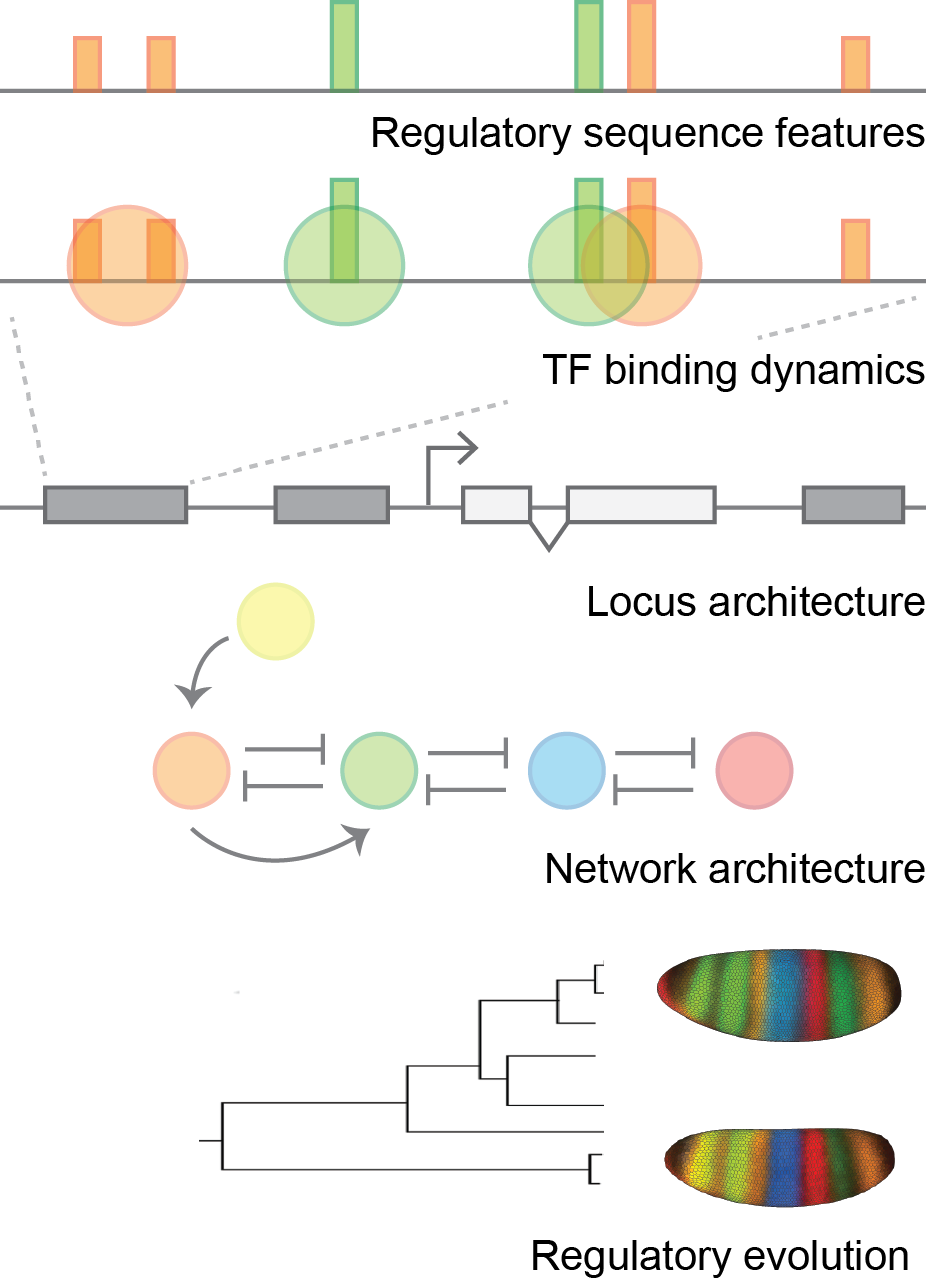 A grand challenge in both molecular biology and medicine is to engineer regulatory sequences that drive gene expression in any cell type of interest. One common approach is to find and use existing regulatory sequences. We’re pursuing a complementary synthetic approach, where we design and construct sequences that drive novel expression patterns. This strategy is informative both when it succeeds and when it fails. We have developed a computational framework that predicts a new way to encode the seven stripe even skipped (eve) expression pattern in the Drosophila melanogaster embryo. By modifying existing eve enhancers, we have encoded two novel patterns. Our results demonstrate that complex developmental enhancers can be rationally altered to output precise, novel patterns. We are currently taking advantage of genome editing to determine the fitness consequences of reorganizing regulatory information in the eve locus.

Enhancers exhibit two seemingly opposed properties: they direct precise gene expression patterns but are also plastic—the TF binding sites that make up enhancers can change rapidly over evolutionary time while maintaining enhancer function. In collaboration with Jeremy Gunawardena, a mathematician in our department, we have developed a general theoretical framework for exploring how a regulatory sequence can be both precise and plastic. Specifically, we are exploring the role of higher-order cooperativity and non-equilibrium mechanisms, such as nucleosome remodeling. To interrogate this theoretical framework experimentally, we have developed new single molecule methods to measure the dynamics of TFs binding to complex enhancer sequences.

We have found that the activity of an enhancer is dependent on its position and orientation relative to the promoter and other enhancers in the locus; in other words, they are not fully modular (Lydiard-Martin et al., 2014, BioRXiv). Based on these results, we are now developing new methods to interrogate the role of locus architecture — where regulatory elements are located relative to one another — in controlling gene expression. We are modifying endogenous loci using CRISPR (Gratz et al., 2013; Larson et al., 2013), adding regulatory sequences systematically to a “neutral” locus (akin to a biochemical reconstitution experiment, but using regulatory DNA), and developing an extract system where we can look at interactions between enhancers and promoters at higher spatial resolution than is currently possible in embryos.

Developmental networks specify cell fates in a highly canalized process—embryos build muscle and brain cells, but not hybrids of the two. A priori, canalization could either take place at the time that a cell type is specified, or afterwards, by pruning away misspecified cells. We tested these two possibilities by depleting a key TF using RNAi and measuring the response of the entire downstream transcriptional network using cellular resolution imaging (Staller et al., 2013, Staller et al., 2015, Development). We found that canalization occurs at the level of the network: cell types continue to be properly specified even after a gross perturbation. This dataset is uniquely suited for challenging computational models of network behavior, which are widely proposed but rarely tested using appropriate experimental data. We are now generating comparable datasets for other perturbations and developing computational models to account for canalization at this scale.

In the first research project in my lab, we asked whether the divergence we see in expression patterns between closely related species could be attributed to sequence changes in enhancers. We measured and modeled the output of orthologous enhancers in both transgenic reporters and in their native context—embryos from other species (Fowlkes et al., 2011; Wunderlich et al., 2012). We found evidence of compensatory evolution outside the enhancer we studied even at short evolutionary distances. This quantitative evo-devo study turned our attention towards studying gene regulation at the locus-level rather than focusing on individual enhancers. We have now applied this approach more widely and have identified an example of compensatory evolution between another pair of shadow enhancers that regulate Krüppel, a gap gene. These results demand that we study regulatory evolution at the level of the locus instead of at the level of individual enhancers.